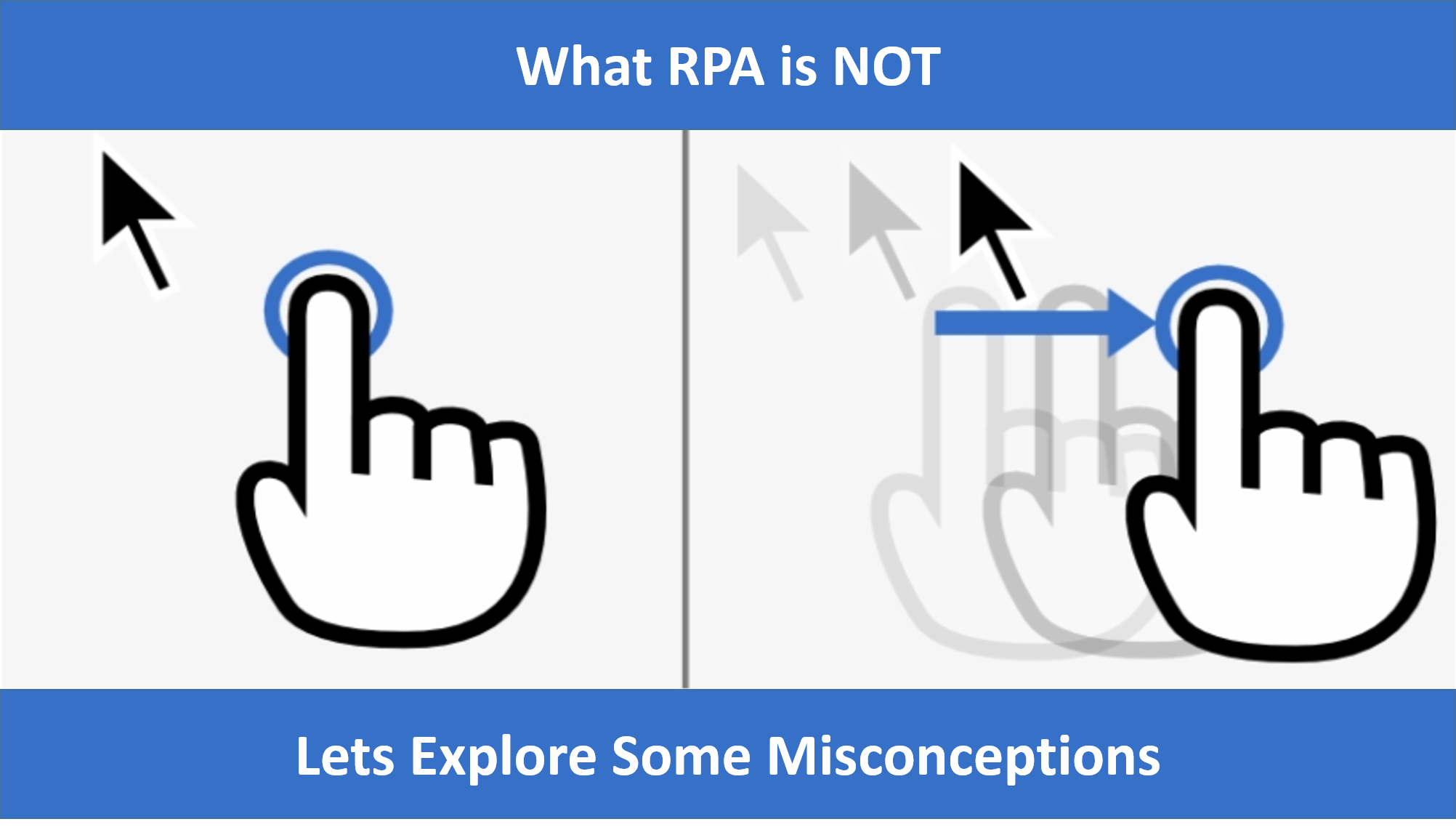 We will address Five common misconceptions today starting with,

Yes, coding is mostly comprised of keystrokes, but they aren’t random. The are deliberate, and produce an outcome which coincides with the vision nested in our mind.

Often times the logic and vision don’t coincide, and that is because of the faulty logic we have developed.

To become a good Developer, you have to be capable of developing and maintaining complex logical networks inside your head, before bringing them together onto the IDE.

You should also be competent enough to know how they ought to be developed, reinforced and reused (also called best practice or coding standards) and how to test and debug them.

In other words, you have to understand what you are about to develop, before you attempt to.

How does this translate into RPA?

Sure, most of it is click and drag, but all of it is dependent on your ability to grasp various aspects of the business process and thread them together into a robust automation that works seamlessly across any operating system.

That being said, RPA is not as complicated as coding.

You can dedicate an entire lifetime to coding, and still leave many stones unturned. There is a sort of beauty to this endless pursuit, knowing that you will never run out of opportunities to learn and explore.

Such is not the case with RPA.

It is still in its infancy so it’s easier to catch up, however we do have the option of using scripts which enables RPA developers to have a taste of this endless pursuit, if they wish to engage.

Lots of recruiters put this up as a prerequisite, under the erroneous assumption that only programmers are capable of developing RPA solutions, when that’s simply not true.

Is it necessary to know what the car you drive to work with is composed of, as a prerequisite to getting a license?

Learning how to code is deeply rewarding no doubt, but it isn’t necessary, nor should it be treated as a prerequisite.

You don’t need 10 years of experience developing end to end applications, to work with RPA.

You do, however, have to be aware of coding concepts like initializing variables working with a wide variety of variables, working with loops, handling errors, dividing automations into reusable components, storing sensitive data appropriately etc.

RPA focuses on the practical side.

Once you are done explaining the construction and working of a turbocharger.

If RPA was a passing fad, then it wouldn’t have reached the height it has today.

RPA wouldn’t have grossed over a billion dollars, with an expected projection of 13.4B by 2028.

Microsoft wouldn’t have acquired Softomotive and embedded RPA features into it.

Organizations around the world have slowly started gaining interest in RPA, owing to its cost reduction benefits as well as time saved.

This isn’t going to fizzle out any time soon, in fact, the rate of adoption is only going to skyrocket as more companies are starting to realize how powerful RPA can and will be in the near future, as features are continuously added to it as the days go by.

In short, RPA is here to stay.

Python is pretty light weight and capable of a lot, but like any programming language, it involves writing several blocks of code, which only performs a handful of operations.

If that wasn’t bad enough, you have to be careful about the scripts you develop, or else you will run into several errors.

This isn’t the case with RPA, as it consists of codes bundled up into click and drag elements.

You won’t run into silly syntactical errors, since you aren’t modifying the code in any way, shape or form.

The only time you run into errors with RPA is either when you haven’t understood the business process, or when you don’t think the process through from your machine’s perspective (You can’t operate on excel unless you open it first).

But if you love Python and wish to continue using it, RPA allows you to use python scripts as well.

You get the best of both worlds!

This is the sort of attitude people once had towards computers.

They were afraid that these boxes of metal, semi-conductors and wire would snatch their jobs away, but what happened instead was a surplus of opportunities were introduced into the market.

RPA is very much similar in that regard, but it does replace workload.

If you are stubborn and refuse to adapt to change, then you will struggle because although RPA isn’t going to replace anyone anytime soon, the shift is gradual, and will eventually take place.

The sort of jobs RPA could potentially take over are BPO, but even then, not in its entirety.

People aren’t going to find themselves out of a job, instead they will be assigned to business roles and platforms which either require their creative input or consists of customer interaction.

RPA will work on the backend as a digital assistant, performing repetitive and mundane tasks while allowing you to focus on tasks that require your complete attention.

In short, RPA will take over a sizable bulk of the workload, but it won’t replace you.

It is not super easy, nor is it impossible to grasp.

It isn’t here to replace anyone (at least not yet), nor is it here to make things difficult for anyone.

RPA is just like any other software, with a bright future ahead for those who devote themselves to the craft.